The harvest is ripe and ready among refugees in Germany 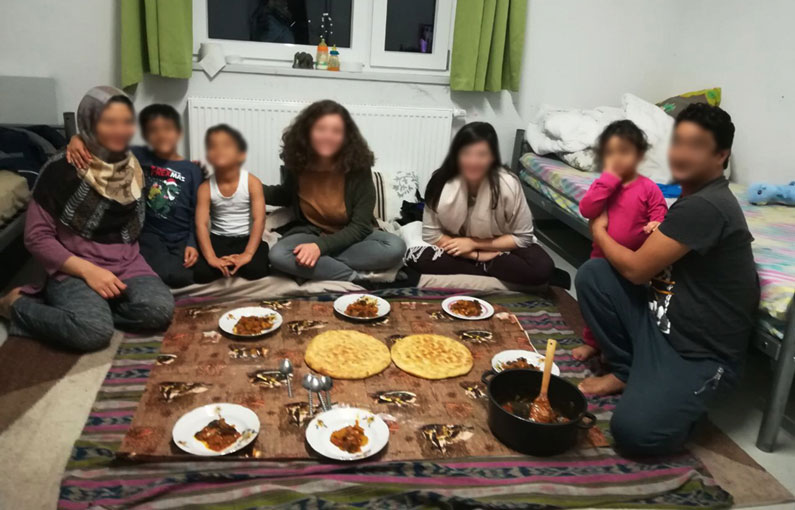 A new season of building relationships began for the CMM team in Germany as mobilizers, Shana and Brandi, sat in the candle-lit home of a young German woman named Mira. Mira told them stories of refugees whom she was helping out of abusive relationships, sharing the gospel with, and spending hours investing and pouring into. Mira was clearly living a lifestyle that models Christ’s mandate to make disciples of all nations.

She has tapped into a unique and timely opportunity to bring the gospel to the unreached without leaving her home country. The mass influx of refugees into Europe has yielded unprecedented access to some of the world’s most unreached people groups. Individuals and families from Syria, Afghanistan, Turkey, Iran, and other nations have flooded countries like Germany—the unreached coming to the reached.

Before long, a friendship and ministry partnership began between Mira and our Germany team. She served as an open door to several refugee camps in the region and modeled doing ministry among the unreached.

One day, Mira invited Shana and Brandi to join her at a refugee camp outside of Frankfurt. Setting aside all agendas and expectations, they went along with her.

“As we pulled up, Mira informed us that we would be helping host a Kids’ Christmas party at the camp,” shared Brandi. “Nearly 30 children showed up from all ages and backgrounds. Part of the program was to teach the kids about the reason for celebrating Christmas through activities, songs, and games. We were amazed as children from Afghanistan, Syria, Sudan, Iraq, and many more countries stood singing songs about our King. What a beautiful picture!”

Afterward, Mira took Shana and Brandi to visit an Afghani family that she had established a relationship with over the past two years. This family of six has welcomed Mira, who has brought the awareness of Christ to the family in the way she loves and in the way she speaks of who God is.

Before arriving at the family’s house, Mira shared that through previous conversations with this family about the gospel, the mother had given her life to Jesus. However, while the husband and father of this family expressed great interest in learning more about hope in Jesus, he had not yet made such a decision.

Regardless, the family answered the door to these three women on short notice and invited them in with open hearts. In this small room, lit with a single fluorescent light, two parents and four children shared two beds. There was an additional mattress on the floor which served as seating for guests. Beyond this, the room was sparsely furnished, yet the family never complained. Rather, they generously served chai and invited the women to share a home-cooked Afghani meal with them.

For the next four hours, they stayed with this family, listening to how they traveled out of Afghanistan to flee violence, spent five days on a boat without food, and walked across several countries to finally reach Germany, where they were granted asylum.

This particular day, Mira asked the father of the family if he had read the Bible which she had given him previously. He said he had indeed been reading the Bible and had some questions. Mira opened the Bible to a passage which provided an answer to one of these questions. Passing it to him, she directed him to read the passage out loud to his family in his mother tongue. It was incredible how she gave the leader of this family ownership over the spiritual growth of his family, even before he was a believer himself.

It remains evident that the Lord is using Mira to plant seeds of the gospel into fertile soil. From what the Germany team has witnessed, many refugees, like this Afghani family, seem hungry to learn about the hope found in Jesus and put their trust in Him, despite high threats of persecution. The harvest is ripe and ready. However, more people like Mira are needed—people who leverage their time, talent, and resources to live out the Great Commission through their ordinary lives.

Please join us in praying for the Lord of the harvest to raise up a willing labor force in Germany to bring the gospel to the unreached refugee populations that are flooding into so many European cities.