Xplore introduces Brazilian teen to his strategic role in missions 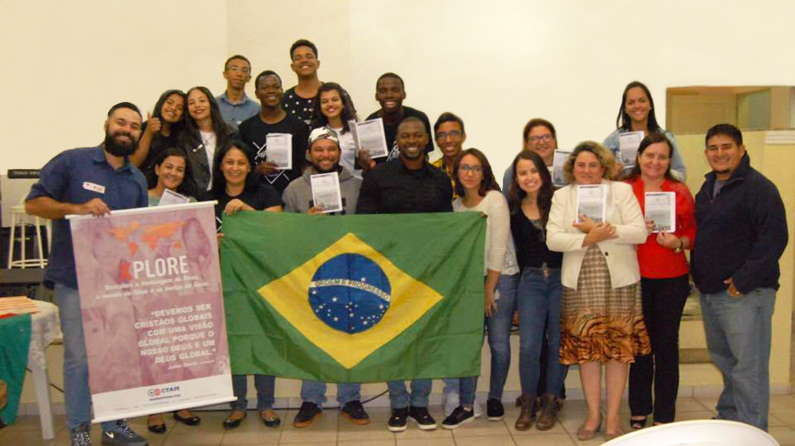 The CMM is committed to getting the gospel to the unreached by igniting mission sending movements from outside the western world—where 80 percent of evangelicals live, places like Brazil and many other Latin American countries.

While the U.S. still remains the largest sender of missionaries in the world, Brazil has has been experiencing massive growth in mission sending and is among the largest mission senders in the Global South.

Tiago is a Brazilian believer who is a mobilizer at heart. As director of the mobilization division for a Brazilian mission agency, he became a friend and co-laborer of the CMM team that was based in Sao Paulo for several years. One of the tools Tiago has adopted into his mobilization strategy is the CMM’s Xplore study.

Like many of our friends around the world who use Xplore, Tiago has formed his own way of presenting the study. Mobilizing mainly throughout the state of Sáo Paolo, he speaks and teaches at numerous churches, sharing about missions, recruiting mission workers to be trained, and raising prayer warriors and financial partners to undergird the missions movement.

For many Christians, engaging with Xplore is the first time they have the chance to hear about unreached people groups and God’s global plan to bless all the nations. Tiago is committed to introducing believers to new ideas like this.

Last summer, Tiago and his team planned and coordinated another Xplore study. They decided to promote the study on Facebook, which is how Wilson, a 16-year-old high school student, heard about it.

Wilson lives in Sáo José do Rio Preto City in Sáo Paolo Brazil with his mother, preparing for a job in the government as an intern at the Electoral Justice Office.

The Xplore study opened Wilson’s eyes to the biblical basis for mission throughout Scripture and to the plight of the unreached around the world, just as it has for many other Christians. According to Tiago, Wilson began to understand that God is moving throughout the world to purchase a people from every nation. He realized God was inviting him to partner in what He is doing through His church and through faithful disciples just like him.

Wilson is now actively interceding for the mission movement taking place in his country. This type of intercessory prayer is perhaps what continues to fuel the mission sending movement from Brazil, making it the second largest mission sending country, behind the U.S. Wilson is also considering serving cross culturally himself to work with children, using education as a platform.

Wilson is just one of perhaps tens of thousands of believers around the world who have been exposed to Xplore. He represents several thousand believers across the world who now understand “the harvest is plentiful, but the workers are few,” and who are obeying Christ’s command to “ask the Lord of the harvest… to send out workers into His harvest field.” (Luke 10:2).  Join Tiago, Wilson and other mobilized believers around the world and pray that God will continue to answer this prayer in Brazil and beyond.