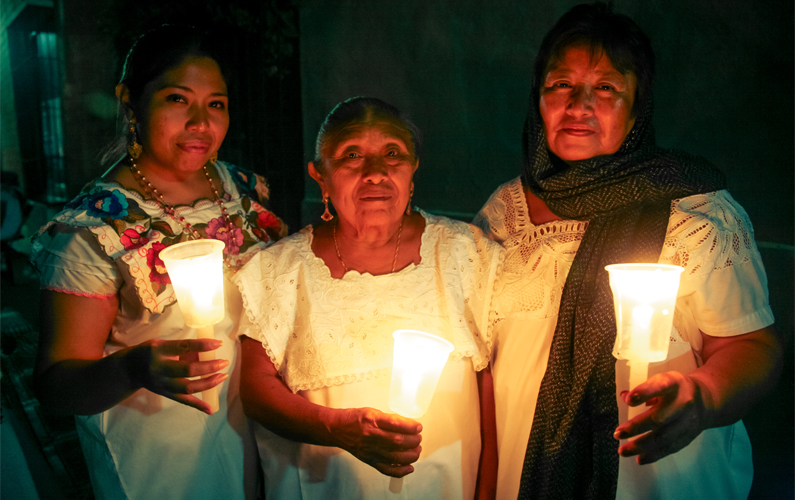 Why gospel-saturated Latin America could become an epicenter of sending.

As Charlie and Anna said their goodbyes to their family, they got into their car and prayed that God would give them courage and faith as they made the 24-hour drive to Mexico. Mixed feelings of grief and excitement washed over them as they drove through open sky and sun-drenched desert. The closer they got to Mexico City, the more eager they felt about making their home in this city and tapping into the potential of local believers in the Latino Church and seeing them mobilized to where Jesus is not yet known.

Mexico itself has 26 unreached people groups, nine of which are unengaged (meaning those peoples don’t know anyone who knows anyone that could tell them about Jesus). Despite ninety-five million Evangelical Christians, Latin America is the least sent region of the world. Due to the lack of mobilization, there is also a lack of sending agencies and very little exposure to the unreached around them. However, if the Latin American Church was mobilized in proportion to its size and prosperity, its mission force would be 8 times larger than what it is currently. It stands as one of the most promising regions of the world for sending.

If the Latin American Church was mobilized in proportion to its size and prosperity, its mission force would be 8 times larger than what it is currently.

Something intriguing about Latinos is their unique advantage for living among certain unreached peoples, especially Arabic speaking countries. Latinos and Arabs have strong similarities in culture, family structure, and even language (more than 4,000 words in Spanish derive roots from the Arabic). Latinos can easily obtain visas and jobs in countries where many other Westerners cannot. This is why Charlie and Anna didn’t hesitate in uprooting their life when they saw the need for mission mobilization in Mexico. The sheer potential for mission movements fueled by Latino believers is mind-blowing.

Two weeks after Charlie and Anna arrived in Mexico City, Covid-19 locked everything in the city down except grocery stores. Most of their friends already doing mission in the city moved their work and meetings online. Charlie and Anna’s team was presented a significant challenge since they had just arrived with very few ministry relationships established. They thought through what they could do despite the lockdown, they were encouraged by Paul’s situation in Acts 28. Paul was under house arrest with a Roman soldier assigned to guard him at all times, yet he remained faithful:

“He (Paul) lived there two whole years at his own expense, and welcomed all who came to him, proclaiming the kingdom of God and teaching about the Lord Jesus Christ with all boldness and without hindrance.” (Acts 28:30-31, ESV).

Charlie and Anna wanted to share the gospel with boldness and mobilize others even though they were confined within their apartment. They had to trust that this was still God’s perfect timing for them, even though doing mobilization in another  country during a worldwide pandemic seemed unfeasible. They prayed for opportunities, eager to see what God was going to do through their team. Shortly after, a local pastor invited their team to begin facilitating Xplore studies in Spanish through Zoom. This allowed Charlie and Anna’s team to begin meeting other believers virtually from other parts of Mexico.

Through one of these Xplore studies, they met Gadi.

When Gadi was 21 years old, she was hired to be translator for a group of missionaries from the United States. Twenty years later, Gadi herself is ministering to people in Oaxaca area of Mexico. She has a deep desire to see the Mexican church sent out to the unreached. Gadi joined an Xplore study and kept meeting with Charlie and Anna and their team. She shared her insights into church culture in Mexico and two traditional beliefs that posed challenges to mobilization. First, that a mission worker’s life is seen as a joyless and miserable one, full of hardship and abject poverty. In Gadi’s words “missionaries are eating dust and sleeping on the floor with fleas.” Secondly, giving toward missions is not part of the church culture. The foremost reason Mexican missionaries leave the field by the end of their first term is because of lack of finances. Charlie and Anna realize this is no small barrier to overcome for their team as they seek to influence healthy change in the culture of giving and the perception of missions within local churches.

As Charlie and Anna’s team learns more about their task in helping to mobilize the church in Mexico, they pray they can help bring perspective and change in the culture of giving so that churches can send out fully-funded mission workers.

Gadi faithfully studied through Xplore with the team. After finishing the final chapter, Gadi said, “Xplore is the one of greatest tools I have read and studied about missions. In my opinion, it’s the summary of ‘misinologia‘: the biblical basis of mission.” She then proceeded to lead her own Xplore studies online with over 75 students! As Gadi uses Xplore to mobilize others, she has seen significant changes in people’s hearts, minds, and participation levels in missions. Two pastors who went through her Xplore study began working in their churches to renew their visions for mission, and one young woman started a small group that writes and sends encouraging letters to women laboring in the mission field.

The Vision Set Before Them

As Charlie and Anna’s team learns more about their task in helping to mobilize the church in Mexico, they pray they can help bring perspective and change in the culture of giving so that churches can send out fully-funded mission workers. The ultimate goal is to see churches pour effort into sending whole teams composed of spiritually healthy, vision-driven, fully-funded Great Commission workers. In Gadi’s own words, “We are all called to mission – we just need to find our place in it and learn how to best contribute. ‘Therefore go and make disciples of all nations’ is a command Jesus gave not to just a few, but to all of us.”