No barriers will impede God’s mission 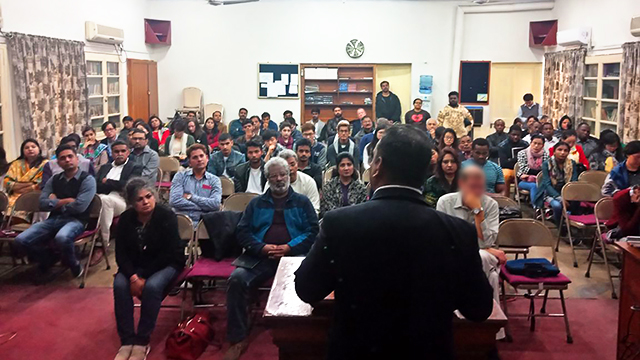 CMM Global Affiliate leads the cause of mission mobilization in Pakistan

When Asif first sensed God’s call to the nations, he thought, “I will change Pakistan through my prayers.”

But over time, Asif realized the need was too great and the task was too big for any one man or one church to accomplish. To reach Pakistan—and the rest of the nations—with the gospel, it would require the whole body of Christ.

Today Asif and the international church he pastors are leading the charge for mission mobilization in Pakistan and setting the pace for other churches to follow. Regionally, Pakistan has access to more than one third of the world’s unreached people, and nearly 200 million unreached within its borders. As one of the newest CMM Global Affiliates this past year, Asif realizes the vast potential the Pakistani church has to move the gospel into unreached areas, though it is not without challenges.

He says Christians in Pakistan are often filled with fear, and even hatred toward the nation. “They feel neglected and a persecuted minority, so the natural response will be to hate the majority and other nations, especially if they’re not Christian,” he says.

But as their mobilization efforts have begun to take root, Asif and the other leaders have witnessed firsthand that the love of Christ is more powerful than cultural or religious barriers.

Because Asif is also the national coordinator for Kairos in Pakistan, half of his congregation has gone through the Kairos missions course, which has initiated a significant paradigm shift within the hearts of church members. He has also found the Xplore study complements his mobilization efforts, offering another entry point for believers to learn about God’s heart for the nations and practical ways to get involved.

Asif and other church leaders have watched God use mobilization to shift the hearts of people in their church and help them move from an attitude of selfish indifference toward the nation to loving and praying for their nation instead. As a result, the church has adopted the Kashmiri people group in northeast Pakistan, a group that is 100 percent Muslim. They spend focused time in prayer for the Kashmiri people and take short-term trips to the Kashmir region. The giving patterns of their congregation have also changed, and people have begun putting a financial priority on supporting mission efforts to the Kashmiri people, as well as other unreached groups. For seven years, the church dedicated 7 percent of all giving toward unreached people groups.

Asif has already begun expanding mission vision even further by offering to host Xplore small group studies outside his church for the larger Christian community throughout Pakistan. He has also worked with our CMM team in the Middle East to orchestrate the translation of Xplore and Go Mobilize into Urdu, a common language not only in Pakistan, but also India, the country with the highest population of unreached people in the world.

Asif hopes in the next five years, Pakistan will witness a mobilization movement toward the unreached and each of the remaining 400+ unreached groups would be adopted by an individual, family, or church. He prays this will result in a viable church within each of these people groups within the next 10 years.

Lord, let it be so! We praise God for mobilizers like Asif who are not afraid to dream big and ask the Lord to do mighty works in their country.

Please consider adopting the Pakistani church by using a globe or map to pray over them and ask God to continue using them to advance the gospel throughout the Middle East.