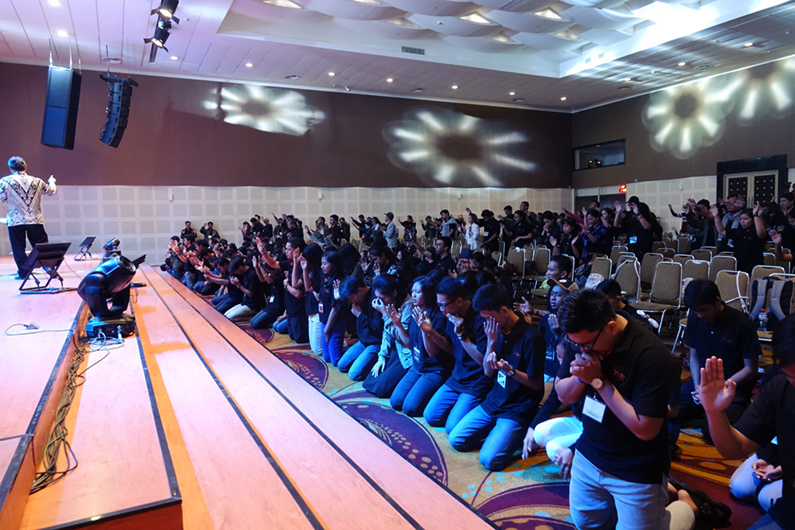 Dozens of people were coming forward. The platform at the front was crowded with young Indonesian students, some with heads bowed down in worship, others with hands and faces raised high in surrender.

On that summer day in Indonesia, our executive director, Steve Shadrach, and an Indonesian mobilizer challenged 300 students to commit at least three years of their life to take the gospel to an unreached Muslim people group, and more than 80 of them came forward.

This was the culminating moment of the Finishers Conference, one of many such events led by the National Unreached Peoples Network in Indonesia. Ananda, director of the Network and a CMM global affiliate, has used these conferences, along with others, as a strategy for expanding the mission movement in Indonesia.

At another Finishers Conference, more than 100 people committed to go to the unreached. As part of the Network’s follow up plan, many of these students are placed into Xplore small group studies. After completing the study, they are then connected to training opportunities that will prepare them to go to the unreached.

Stories like this are the result of months and even years of groundwork being laid by the CMM’s Southeast Asia Catalytic Team. For the past three years, they have been teaching, networking, and partnering with influential mission leaders and church pastors throughout 11 countries in Southeast Asia. These relationships have created opportunities for new collaboration and partnerships, which have led to initiatives like mobilizer trainings and the Finishers Conferences—all of which spread mission vision to the body of Christ and help launch more missionaries to the unreached. The relationships our teams cultivate undergird our mobilization strategy and help create sustainable mission sending movements by encouraging and empowering indigenous mission leaders.