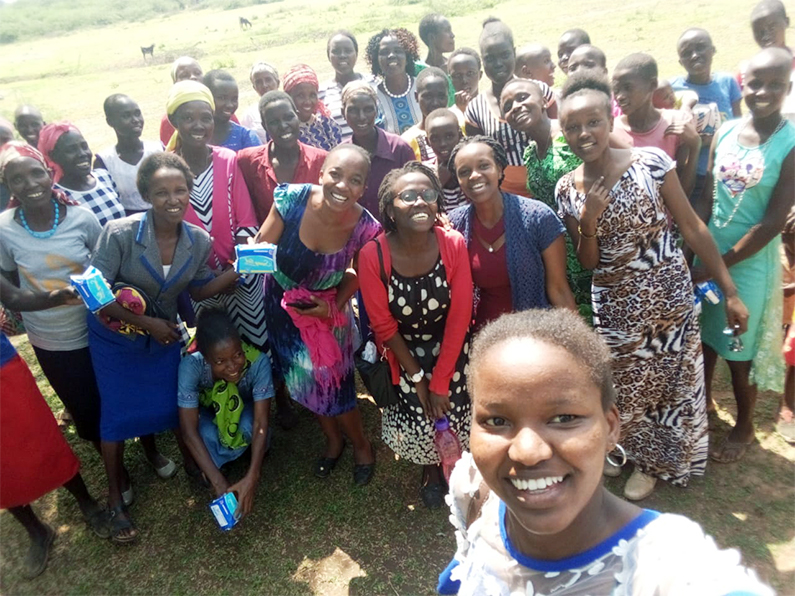 Pictured above: Kenyatta University medical students passing out sanitary towels for women in an unreached people group within a traditionalist Kenyan town

I first heard Miriam Ndanu share these words with her classmates as she was introducing me as the guest speaker in their weekly Christian Union meeting. Miriam is a medical student at Kenyatta University who realized that God has given her unique gifts and opportunities to be a witness of God’s love and grace to the rest of the world.

When we first met Miriam, she didn’t know much about the 10/40 Window or the Biblical basis of missions. Like most Kenyan believers, Miriam saw missions as a Western idea, not something for African believers. Because Miriam held this belief, she did not see herself playing an active role in accomplishing the Great Commission. For her, being a good Christian meant going to church every Sunday while staying away from the things of this world.

During her fourth year of medical school, Miriam was able to connect with a few of the CMM field workers in Nairobi, Kenya. It was during that time that God showed her what following Jesus was truly about. Through Scripture, Miriam saw that she was truly blessed by God to be a blessing to others. Verses like Genesis 12:1-3 and 2 Corinthians 5:17-21 gripped her heart. This was a complete paradigm shift in her Christian thinking.

She became fascinated with the thought that God could and would use her, a simple student in Nairobi, Kenya. As CMM field workers began walking with Miriam in her missional journey, she saw that every blessing she had was from God. God began opening up her eyes to show her how she could use those blessings to see God worshipped in all parts of the world.

Medical school was no longer about simply getting the degree to practice medicine, to get a good job, to make a lot of money, or to raise a family. Miriam began to see how she could use her medical degree to physically display the love of God throughout the world. She began to realize how she could be a demonstration of God’s healing capabilities to those who are hurting and suffering. God was showing Miriam how He could use her to advance His kingdom, the kingdom of life, to the suffering places of the world.

Immediately after finishing the Xplore and GoMobilize studies, Miriam was excited to live out all the things she learned. She knew these studies were never meant to stay with her. She knew she had to not only share this information with others, but also find a way to incorporate her medical studies with the advancement of God’s kingdom. With the help of the CMM field workers, Miriam was able to get trained in medical missions and get plugged into the Global Health Mission Conference. Through these steps of faith, she was introduced with an opportunity in which she would be able to serve at a medical mission camp in Ghana.

Her trip to Ghana was a follow-up trip from previous medical mission camps. The previous year, the doctors taught the women in the village basic medical knowledge. They were able to teach them how to clean wounds, how to prevent the spread of HIV/AIDS, and how to deliver babies. As the medical missionaries were teaching these women these basic health skills, they were also teaching them how to share the gospel with others in the community. As Miriam went to Ghana, she was able to see how God uses people to heal their physical wounds as well as meet their deepest spiritual needs.

The Ghanaian village they visited borders another village that is mainly Muslim. In this Muslim community, it is common for the women to give natural birth in the home. As the Muslim women are preparing for birth, the trained Christian midwives would offer their services to help deliver the baby. Culturally in Ghana after a woman gives birth, the midwife stays in the home of the mother for four months. During this time, the Christian midwives would share the gospel with these Muslim mothers, and many of these mothers came to know Christ through their witness!

For these Muslim women, they were able to practically experience the love of God for the first time, through Christ. Not only did they hear about how God is a healer, but they experienced healing through the work of the midwives. For the first time in their lives, the love of God touched their hearts, and all of this through the loving care of the Christian midwives.

Once these mothers came to know Christ, they too were trained on how to share the gospel with their husbands, family members, and neighbors, and many times would actually lead their families to Christ. Within the first year of the medical missionaries’ arrival, more than 100 women gave their lives to Christ (not including the husbands and children who later also made the decision).

For Miriam and the rest of the medical team, after hearing about such dramatic changes in so many women’s lives, they realized the most strategic thing for them was to continue training the Christian women in both basic medical practices and evangelism. They knew that if they were able to mobilize the new believers in the village to love their Muslim neighbors, then in turn those believers would also be able to reach the Muslim village with the gospel of Jesus Christ. For Miriam, everything she learned through Xplore and Go Mobilize came full circle. Miriam saw firsthand how being blessed with medical knowledge gave her the opportunity to be a blessing to others for the sake of the gospel, and she also saw how impactful and essential it is to mobilize other believers.

After her time in Ghana, Miriam traveled back to Kenyatta University fully convinced, if not a little biased, that doctors have the greatest opportunities to impact the world in missions. While introducing me to speak to her classmates, she continued by saying,

“As doctors, we have the opportunity to use our hands and our degree to heal the world. We live in a broken, sinful world and people are suffering out there. Our God is a Healer, and as doctors, we heal people. But as Christian doctors, we do not just heal people from their physical pain, we also heal their souls by telling them the eternal life that is in Jesus Christ.”

Miriam is currently finishing up her final year of medical school. As she is finishing, she is using this opportunity to lead the Medical Christian Union fellowship toward more of a Great Commission mindset. Through her leading, she was able to mobilize several of her students to go through Xplore, taking them through the same process that first mobilized her. And now those students are starting to see how they are truly blessed to be a blessing toward those who are perishing around them. After Miriam graduates, she would like to work full time as a medical missionary, healing people of their physical pains as well as bringing eternal life to their souls.