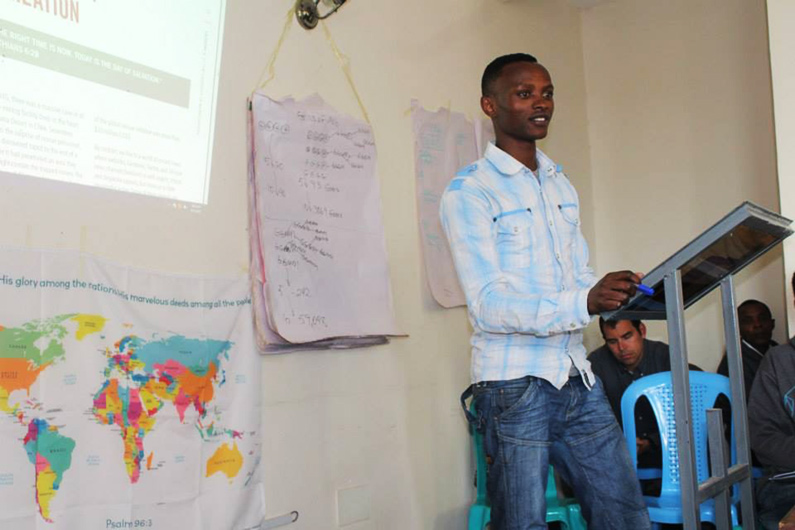 When the CMM team in Kenya met Peter, he was studying at the most secular and prestigious university in Nairobi, in full pursuit of the Kenyan dream. He hoped to someday work for the U.N. and help support his family in the village, as any good, educated Kenyan is expected to do.

Peter was born in central Kenya, where his family raised him as a Muslim. But at the age of 15, Peter discovered the words and teachings of Christ, and began to fall in love with Jesus. Soon after, he decided to follow Jesus and leave behind the teachings of Islam.

As our team began getting to know Peter, they went through the Xplore and Go Mobilize studies with him. At first, Peter clung tightly to his personal dreams and his idea of being a good Kenyan. But over a two-year period involving life-on-life discipleship and a cross-cultural training project in Ethiopia, Peter’s heart began to change.

After the training in Ethiopia, Peter realized his life purpose was not just to get a good paying job, but to participate in the Great Commission Jesus gave to His church. He began sharing this new passion with his fellow classmates and inviting them to live their lives in obedience to God’s mission.

But even with his new passion, Peter still didn’t know his most strategic role in the Great Commission. So when the CMM team planned a trip to northern Kenya to visit a missionary school, he immediately signed up. This missionary school is located in a town that is a well-known stronghold of Islam in Kenya. It is the only school of its kind in Kenya.

While Peter was visiting the school, God began moving in his heart as they learned about evangelism to Muslims. As a former Muslim, his heart began breaking for others still adhering to Islam.

A week later, Peter decided to lay down his degree, the Kenyan dream, and the rest of his plans at the foot of the cross to join this missions school. He is now training with other Kenyans to be a missionary. They are learning Islamic apologetics, church planting methods, and spending up to five hours a day in prayer for the lost people in their city. As part of their training, they go out several times a week to share the gospel and love the people in their city.

One Saturday, Peter and one of his schoolmates were going out door to door, greeting and visiting people in their homes throughout their city. They came to the home of a Muslim Turkana man who welcomed them inside. During their visit, they proclaimed the gospel multiple times, to which the Turkana man responded with uncertain skepticism. They soon noticed an older woman, an mzee, in the next room. When they asked if they could visit and share with her, the Turkana man replied, “Yes, she is my grandmother. You may try, but she is deaf, so it will do no good.” Peter and his schoolmate decided to go in and pray for the grandmother regardless. After they prayed for her, the grandmother’s ears were opened, and she began to hear Peter’s voice praying for her. They then shared the gospel again with the Turkana man and his grandmother, and both decided they wanted to follow Christ!