Family mobilization training is launched in China despite tight security 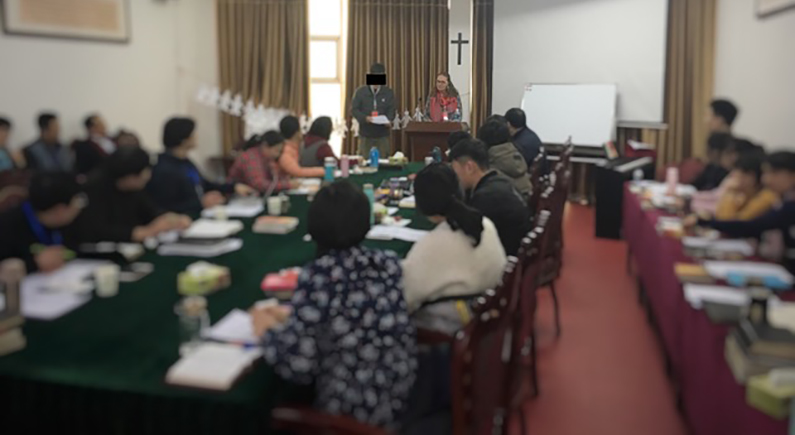 Nearly 40 parents and pastors gathered together in a back room, on the top floor of a factory office building. Everyone removed SIM cards from and gave up their cell phones for the duration of the training. They were sleeping on mats on the floor throughout the building; there was no heat and the temperatures were near freezing. Only a small handful of participants ventured outside the gates of the factory compound. All of this was done in order to avoid raising suspicion and alerting the Chinese authorities to the fact that there was a large group of people meeting in this place.

This was the first BIG Story Training to take place in China. Developed by Weave, a ministry of the CMM, the BIG Story Training (BST) is all about God’s plan to redeem a people from every tribe, tongue, and nation—and specifically about the role He invites families and children to play in His big story. Through this training, we want to help parents see that God has a plan for their whole family to be involved in spreading the gospel to the ends of the earth, and to give them tangible ways to do just that.

In more than 10 years of doing ministry in China, I have never experienced an event with security as tight as it was for this training. It amazes me to see what local believers are willing to do and sacrifice so they can grow in understanding the Lord’s purposes.

“I know that we are all nervous,” one of our hosts said before the training began. “But nothing happens without God’s permission. So, if anything happens [if there are any security problems], we know God has allowed it, and it is a blessing.”

I admit it was a bit frightening at times, but my team and I felt a deep sense of responsibility, believing that the Lord was about to do something really big.

One man who attended the training, Warren, leads a house church of about 120 people in a major Chinese city. He shared that he had been given a vision for mobilizing families and children but just didn’t know where to start. He explained how the BST was an answer to prayer, and he is already talking about having another training back in his city. His wife shared that the parents in their church desperately need this training to help them understand how to raise children with hearts that are passionate about God’s purposes. She and Warren both long to see families rising up to play their part in fulfilling the Great Commission. There are already discussions of having at least three more trainings in this region!

Another local pastor’s wife told us she couldn’t wait to share what she learned with the parents in her church, so that they might view their children as “ambassadors for God.” It was so encouraging to see the desire these parents expressed to help their own kids, as well as other families around them, understand how God wants to use them in taking His name to the ends of the earth right now!

When we listen to testimonies like this, it confirms that our Chinese brothers and sisters in Christ are ready and eager to actively engage in the Great Commission. With perhaps the largest population of Christians in the world, the Chinese church represents a massive mission sending force to the millions of unreached people within its borders, and in the greater Southeast Asia region. We believe families will have an increasingly important role in this.

“The Chinese church is facing so much persecution now,” shared another house church pastor at the training. “The government is dismissing churches, but they cannot dismiss the family! It is possible that, in the very near future, we will not be able to meet, except as a family, for worship. Now is the perfect time to be bringing this training into our families and the way we raise our children.”

We are confident that God is raising up a generation of Chinese believers whose hearts beat passionately to see Jesus’ name exalted among every tongue, tribe and nation. Join us in praying for the Chinese church to grow in mission sending, and for families to embrace the role God is inviting them to play in His story!