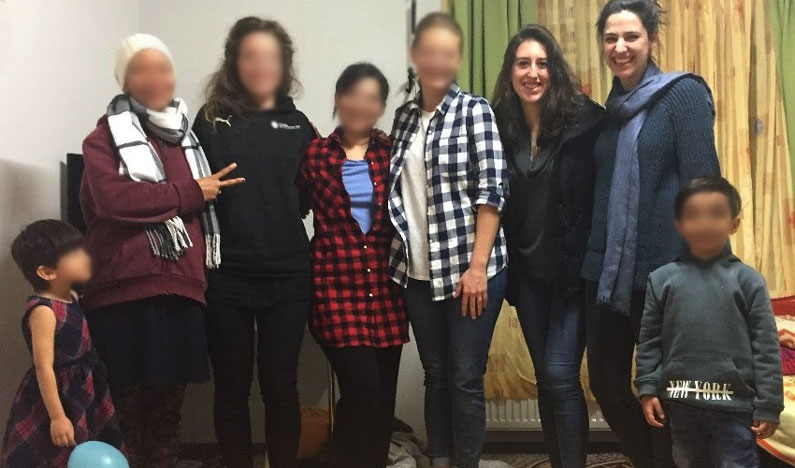 A Uruguayan-American purposes to say “yes” to God no matter the outcome.

Sometimes small challenges and small acts of obedience can cause eternal ripple effects not just for the person mobilized, but also for the countless others he or she will impact. At least that’s the case for Danielle, a quiet young woman whose life was forever changed upon her hearing of God’s global purposes that reach far beyond herself.

During a vision trip in January 2017, seven of us interested in joining the CMM Germany field team attended a church in the heart of downtown Frankfurt called Bethel IBC (since renamed to Multination Church). Frankfurt field team leader John Allert was invited to speak to the congregation and shared the vision of mobilization by sharing what God says in His Word, the current status of His world, and how we can participate with God in His work. Many people in attendance were so inspired that they wanted more, and we handed out copies of Xplore (our primary tool for mobilization) to those interested. Little did we know what this quick interaction would lead to in the future.

Fast forward to Fall 2017. Our team was completed, fully funded, and then able to move to Frankfurt, Germany. As the team was settling in and visiting churches, we again visited Bethel IBC, this time meeting a 20-something Uruguayan-American named Danielle who was living in Frankfurt. One teammate, Betsy, exchanged contact information with her and arranged to meet up. At the first meeting, Danielle seemed open and willing to learn, but at first glance was not the type of person one would envision as a world-changing mobilizer. She was quiet, shy, and not very assertive. Yet, walking away from dinner together that night, Betsy still felt the Lord instructing her to pursue Danielle.

Months passed. The two of them met up again multiple times, but many of these interactions seemed to be less than fruitful. One day, however, Danielle brought up the Xplore booklet, remembering that it had been previously shared with her church over a year ago. Betsy shared a copy with her and within a few weeks, Danielle had read through the entire book on her own. They started meeting together for follow-up. As they did, something began shifting in Danielle’s heart that would soon impact the trajectory of her life.

Danielle was a relatively new believer. She was just beginning to grow in her faith and wanted to grow in obedience to God. She had purposed in her heart even before reading Xplore that if God asked her to take a step of faith, she would say yes. As she read through Xplore, her hunger for God’s heart grew immensely, leading to more “yes’s” than she could have previously imagined.

As she read through Xplore, her hunger for God’s heart grew immensely, leading to more “yes’s” than she could have previously imagined.

During her time with both Betsy and Xplore, Danielle visited refugee camps, started serving at a local Farsi-speaking fellowship, and, in general, continued cultivating a heart for the world, aligning hers with God’s. She began to pray for unreached people groups, give financially to the work God is doing, and even looked into short-term trip opportunities.

Further still, she showed great enthusiasm for sharing what she learned with those around her, inviting them into the journey she was taking. It was clear that Danielle was quickly discovering a passion for the unreached and was making intentional decisions to say “yes” to hard things, another of which included facilitating lessons from the Xplore book in two different large-group training sessions!

Danielle had become a huge advocate for the Xplore study and the vision it embodies. She was the principal reason for one of the aforementioned Xplore training sessions actually being held, and also the reason for the participants who attended, as every one of them were members of her church. With Danielle’s help, this church eventually adopted the seven-week Xplore study as their small groups’ study material. Our CMM team members were a part of each of those groups and saw handfuls of people enlightened with what God is doing in the world and how to join Him, all because Danielle refused to keep this information to herself.

But with each new “yes” and every new act of obedience, Danielle was growing into more than just an advocate and a mobilizer.

One more hard decision was presented to her, as her church was organizing a short-term trip to Greece, serving in a place where many refugees land in their travels from the Middle East or Africa. Six months prior, Danielle had never been to a refugee camp and had never been exposed to an Arab or African culture. Needless to say, she was facing an opportunity that would take her much outside her comfort zone.

She wanted to take this short-term trip as another step of faith, but she was hesitant. She mentioned the idea to Betsy and the two decided to go together, determined to walk through this experience hand-in-hand. Those two weeks were long and exhausting, with Danielle coming face to face with many people’s trauma and a lack of basic needs. After eight to ten hours of manual labor each day, the girls would come back to their room at night and Danielle, often in tears, would debrief with Betsy. She was overwhelmed. She was scared. But she was determined for this experience to not end when she returned home. Ultimately, the Spirit led Danielle toward another hard decision: full-time ministry work.

She said yes to God once more. Danielle now lives and serves in Greece, just over a year after her first visit to a refugee camp. Having quit her job in Frankfurt, she stepped into a position where she would instead have to raise all of her financial support. In just a few months, she had become fully funded and was able to immediately launch into her ministry assignment.

She is now working full-time with a non-profit organization whose primary focus is aiding refugees and asylum seekers. This team is largely made up of people from her home church and others in whom she played a large part in recruiting. Her main task in Greece is to help supervise the team’s programs for women and children and lead the initiative to provide sustainable feminine hygiene products for women living in refugee camps. Praise the Lord!

Danielle is a prime example of the mobilization process captivating the heart of one child of God and growing that seed into a pattern of faithfulness towards the unreached. It’s one thing to personally enact a vision of ministry towards refugees and join God in his heart for displaced peoples, but imagine the impact of lighting a fire in another believer’s heart for the same purpose and seeing those efforts multiplied! This is the core of mobilization: to point God’s people toward God’s work. Pray with us for many more stories like this one. And pray with us for many more laborers like Danielle!