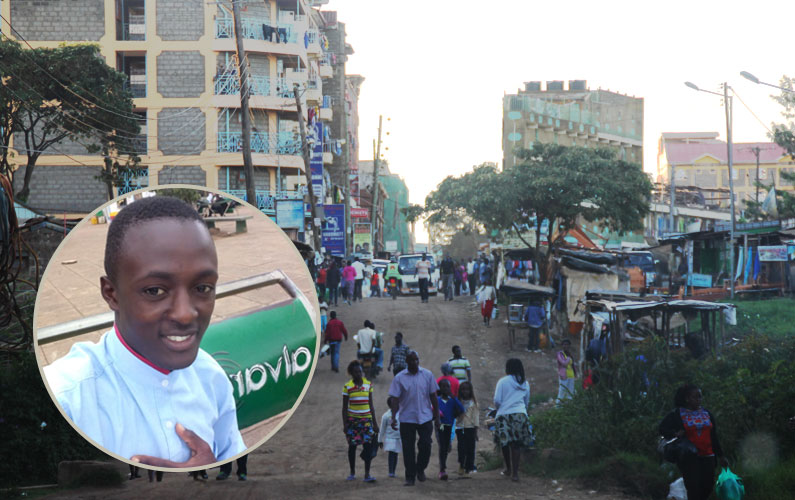 When Thomas first heard about missions, he had only been a Christian for two months. He was still keeping his salvation a secret, still living with his girlfriend, and at that point, he could see no difference in himself from before he was saved and after.

Yet when a couple of wazungu (Swahili word for foreigners) working alongside the CMM approached him on his campus talking about God and something about God’s “desire for all people,” Thomas actually listened. And then the funniest thing happened… God gave him a heart for the nations.

Thomas grew up in a rural town outside of Nairobi, Kenya, an area whose primary source of income comes from small-scale farming, with households growing just enough to keep their own families alive. Making a living alone was a challenge, and one of the only “ways out” for families in this region is through saving up enough for at least one child to further their education.

Attending university is a high privilege for most people in Kenya; therefore, when a child does have this privilege, families often place a seemingly insurmountable amount of pressure for their children to attend university, find a decent-paying job, and then help provide for their families back at home. So when Thomas joined Kenyatta University in 2014, he knew he had to work hard to help his family. But he also knew that at university, there was also “freedom” to do whatever would make him happy. And so his pursuit began.

After arriving on campus, and chasing after women, alcohol, and all of this so-called happiness, these pursuits only let him down. During his third year at university, Thomas realized he “had done everything, but was never satisfied.” He says, “I started asking myself, ‘what can I do to feel complete?’… but I didn’t have the answer.”

After an entire semester of wrestling and a friend sharing the gospel continuously with him, he was finally ready for something more. He then called his friend, met him in town, and made the decision to start following Jesus.

He had been a Christian for just two months when he came across a couple of Campus Outreach (CO) guys from America who were visiting the CMM Kenyan field team. They were partnering with the CMM for a month to meet with Kenyan students and share about the need for the gospel around the world. Thomas said he was so desperate for a change in the way he was living that he was beyond happy and ready to participate.

This brand-new Christian’s eyes had already been opened beyond his own salvation to the salvation for unreached people groups, after only a couple of months of walking with Jesus himself.

They started meeting frequently and going through the Xplore study, a seven-lesson study that helps believers gain a heart for the nations, where Thomas heard about unreached people for the first time in his life. He could hardly believe it when he heard about the millions of people who currently have little to no chance of hearing the gospel, while there were churches in Kenya at every corner. This brand-new Christian’s eyes had already been opened beyond his own salvation to the salvation for unreached people groups, after only a couple of months of walking with Jesus himself.

Thomas was now sensitized to something bigger than himself, but where would he even start? He had so many lingering questions… Could he, despite coming from a low-income family, combined with such new beliefs and an African culture that does not quite understand missions-sending yet, actually be a part of God’s mission to save the whole world?

Joseph Okoth, a Kenyan CMM field staff who had begun to meet with and disciple Thomas, believed he could, and took no time to give him a challenge in that direction.

Upon hearing that Thomas was about to graduate from university, Joseph pointed him to look into missional discipleship programs in Kenya. A two-month missions program was about to start, and rather than graduating and immediately searching for a job that would make him money and please his parents and society, Thomas decided to forego those opportunities and attend the program.

“He was the hungriest I’ve ever seen anyone be,” Joseph recalled. “I realized that with the Holy Spirit working in his heart the way he was, the little we shared during those few meetings were enough to get him excited about growing deeper in Christ and pursuing God’s mission.”

After completing the missions program, Thomas then started to see that God has an even bigger purpose for his life: there are millions of people who have no chance of hearing these truths, unless something changes. Unless he changes.

He was now asking God, “How can I take part in your mission, where you’re saving and you’re redeeming people from every tribe and nation? What can I do?” He didn’t know all of his next steps, but he did know he wanted to say yes.

These decisions in obeying Christ no matter the cost, however, have been met with great cultural backlash. Not only has there been a lack of understanding and support from his family (“Why can’t you get a job, work, and still serve the Lord right here?”; “We’ve invested so much in you, but now you are begging”), but also a lack of understanding from the church.

Even as Thomas was meeting with leaders and pastors of local churches about supporting him for the missions programs, he realized that missions work is not something most are familiar with. One pastor even told him that if he rallied the entire church, they could support him for a total of, at most, 1,000 Kenyan shillings… the equivalent of ten US dollars.

After facing all of this opposition, Thomas still believes in the great potential of the Kenyan Church to recognize God’s call to make disciples of all nations, and how they as Africans can play an integral part of God’s overarching story of redemption around the world! His heart is now even more for the Kenyan church and global church as a whole to know that “God is a missionary God. Missions is for all of us who call ourselves Christians. There’s no exemption.”

In order for this movement to become reality, the entire Church must own the urgency of God’s command to make disciples of all nations. There could be thousands of “goers” all over the world, open and willing to be sent just like Thomas, but if there aren’t churches to send, support, and pray for them, then the goers’ impact will be nowhere near as effective. The Church needs every individual who calls themselves a follower of Christ to take part in this global task to one day see people from every tribe, tongue, and nation be worshipping at the throne of Jesus (Rev. 7:9).

Thomas has experienced firsthand this desperate need for the entire Church to be mobilized, and now sees how “the gospel is urgent, so we better do it now. It’s high time we all start focusing on this.” All of this from someone who just came to know and follow Jesus less than a year ago. It seems that we as the Church have a perfect example in Thomas to stop waiting until the “perfect time” to act or pushing this task onto someone else.

To those who feel they are not ready, Thomas says, “God does not call the qualified. He calls you, then He qualifies you…” This brand-new Christian is willing to be obedient to what God is asking of him — now are we willing as well?

Thomas is now halfway through a one-year missions program, alongside a friend he has already mobilized, that is held within a Kenyan town where many unreached people reside. Pray that Thomas will continue to say yes to Jesus as he pursues God’s heart for every tribe, tongue, and nation to hear the Good News, and that the Kenyan Church will in turn follow this type of obedience.